The Balkun Brothers are hitting their stride. Steve’s singing, low and snarly, goes from relaxed to intense as is right, and his hard-rocking blues guitar goes well beyond the call of mere duty. Brother Nick’s drumming is precise and nimble, even as he whacks ‘em hard, and bassist Caleb Battersby is the perfect accompanist for the pair. Like Boston’s Haley Jane and the Primates, the Balkun Brothers (from Hartford) have just completed their first full-length album after a trio of EP releases that gave notice of their strengths and abilities while creating a craving for more. The new CD fulfills the promise and delivers the goods.

These guys sound like a bunch of kids who always had the clear intention and full knowledge that they would someday be blues-men, while growing up listening to their parents’ Black Sabbath albums. If that might seem to suggest a certain kinship with such as Led Zeppelin, one has only to pop (or click) that band’s BBC recordings into the player to get the gist. This music is unmistakably in the blues tradition, but the hard-rocker looking to get his rocks off without any complications will come away satisfied. It all has a raw quality, even as its studio polish furthers, rather than detracts from, the effect. 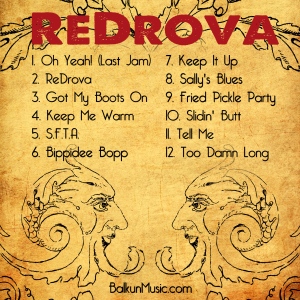 A pair of rough-and-tumble numbers starts the 12-track CD off, “Last Jam” blazing in like a proclamation that We Are Here and the title track, “ReDrova,” affirming the announcement with similar energy but starting with a one-minute dose of 60’s -style “psych” guitar before blasting back to bad-ass. A whole lotta lovely instrumental interlude interposes in the middle of the six-minute track, with multiple guitars layered but not overdone, as the Bolero buildup climaxes and carries in the closing section.

If at this point the listener still has any concerns about whether this is really blues music, those apprehensions should be allayed as the rest of the album plays on. Slide guitars return to their blues roots without ever quite losing sight of those kaleidoscopic qualities, acoustical elements creep up so as to draw in, rather than detract from, the listener’s interest. It’s almost like the band’s undeclared intention is to educate and maybe even convert the rock and alternative/grunge listener to the cause of old-school Roots Music.

“Search for the Arachnid” finds the band revisiting its “Bluesch Metal” alter-ego as first observed on the “Live at the Baeschment” EP. While it might seem like this Who-infused novelty project (think: “Boris the Spider”) was a first foray into recording, it actually followed “God Bless Our Fallout Shelter,” their initial introductory testament and precursor to the full-length album at hand. Another EP, “We. In. Detroit.” comes between these releases; recorded in one take, this one serves as a testament to the band’s power and prowess live. Also, a further ‘underground’ undertaking of more Bluesch Metal is currently in the works, having been recorded and now being mixed for release after the ReDrova tour and associated activities are completed.

When the tempo slows, the drive is still compelling- especially with “Sally’s Blues,” which clearly answers the call for a straight-up blues number, even as it sets the listener up for the rest of the album. A couple of highly entertaining, low-down, back-porch-on the-bayou quickies carry the mood toward the fitting ‘goin’ home’ conclusion of “Too Damn Long.” In the between-times, the songs run through a range of alt-edged rags and funkified shuffles, all seemingly aimed at appealing to a wide array of mainstream listeners without compromising the quality of the time-honored tradition in which the material resides.

In other words, the Balkun Brothers accomplish the admirable objective of staying true to their roots and respectful of institutions while moving the music forward and contributing to the ongoing art-form by adding to an existing body of work with individual flair.

Along the way, the listener is treated to a whole lot of tasty and skillfully executed music, much of it played on custom instruments, as Steve Balkun is a luthier of no small ability; a look at the stage when this band plays is like a walk through a museum of contemporary craft. These implements look great, and they seem to play pretty well, too! The same is abundantly true of the entire band- they all work seamlessly together, whether they’re ripping through a stripped-down set of power-trio “thrash blues” or taking the time to add in a variety of guitars and even the occasional baritone horn, courtesy of bass-man Caleb Battersby. One might suppose that Nick Balkun adds a smattering of percussive embellishments to the mix, but it is worth noting that his energy and attention are also devoted to recording and engineering the tracks for the project. Subsequent mixing and ‘mastering are taken elsewhere, but the initial “documentation’ is done by the drummer at the band’s own Balkun Studios. A few friends add vocals and some keys and harp along the way, but never so much as to detract from the fact that this is the music of the Balkun Brothers, pure and simple- and entertaining, effective and engaging as well. 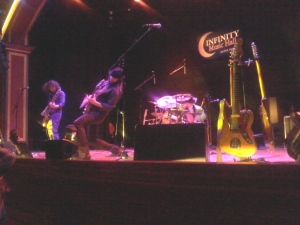 All Songs Written and Produced by Balkun Brothers

Engineered and Recorded by Nick Balkun at Balkun Studios

Special thanks to family and friends /